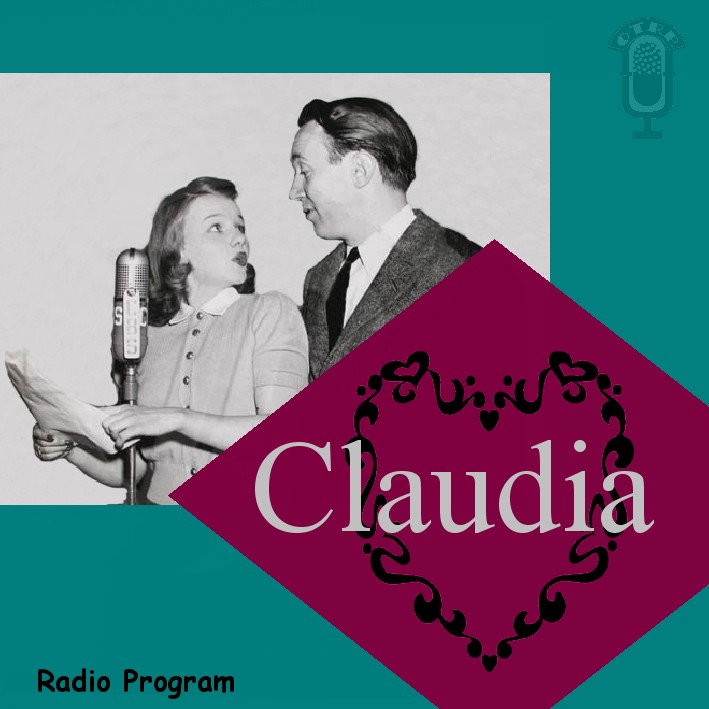 Claudia, which is perhaps better known as Claudia and David, was an old time radio show based on a series of short stories written by Rose Franken and William Brown Meloney, which appeared in Redbook magazine.

The program was a soap opera centered on newlyweds David and Claudia Naughton. It followed the problems and the successes, big and small, of an average newly-married couple, including the need for thrift, having an overhanded mother-in-law, and all those charming little moments of life. The program began as a skit on The Kate Smith Hour in 1941, and was expanded into a full summer series a month later. In those original shows, Claudia was played by Patricia Ryan and David by Richard Kollmar.

Franken and Meloney's stories were collected into books that were adapted into a pair of RKO films, Claudia in 1943 and Claudia and David in 1946. Both films starred Robert Young and Dorothy McGuire. The success of the films prompted Coca-Cola to sponsor a 15-minute syndicated weekday radio program in the 1947-1948 season, starring Kathryn Bard and Paul Crabtree.

Reviewer: Zenithstratosphere - favoritefavoritefavoritefavoritefavorite - October 25, 2016
Subject: A review of Claudia, the Radio Show (1947-1948)..........
Claudia in its' 1947-1948 Radio incarnation, starred Kathryn Bard and Paul Crabtree. Claudia or Claudia and David was based on the stories written by Rose Franken.

A unique aspect to this series of 15 minute radio soap operas is that they are complete and are available both on the Internet and also private companies. This is quite rare, as most long running series are missing many programs and to find one complete is very rare.

Claudia is also available for free from the original transcription discs on the Internet, but the sound quality is very poor, but thank goodness they are available.

All the 300 PLUS episodes ran 15 minutes daily Monday through Friday and the show was sponsored by Coca-Cola.

As noted there are a total of 300 Plus programs and are complete (with no episodes missing) with the beginning show and the ending one available through Radio Archives out of Spokane, Washington with sparkling audio clarity, probably better than when the show initially aired. It was earlier a serial in Redbook all written by Rose Franken.

As to the literary and story content, Claudia grows on you. Simply out of the daily activities and stresses of a newly married couple come daily 15 minute episodes of normal events for such a couple in Post World War II America living in NewYork City. A close relationship exists between Claudia and her mother, but it is not in anyway overbearing as actually it enriches David and Claudia's relationship. Then come a series of circumstances such as getting a kitten, then a dog, burning a meal, breaking a priceless gift given to them by a friend, dealing with a new apartment, getting to know your neighbors and landlords, dealing with the New York traffic, shopping, women driver's, job decisions, social events to attend, walking in Central Park, helping out an Organ Grinder, decorating a new apartment, having close relationships with other relatives in life, dealing with the death in life and other aspects that any of us living know, working with employees, getting a traffic ticket, having a auto accident. dealing with suitor's not aware Claudia is married, buying antiques and furniture for a new apartment, the sorrow of losing friends and animals, these are the issues making up the story of the newly married couple of David and Claudia Naughton and Claudia's mother. Not new to any of us, but their story is told in warmth, sensitivity and can remind one of many instances in our own lives. Most importantly the episodes allow the listener to know that a newly married couple can truly love each other despite their individual faults, insecurities and frailties, without the drama such literary material can often depend upon.

Quite an unusual trait for such a Radio or television program in having a lack of drama, but a charming one as you fill find out if you listen daily for all the episodes as was the way the program was intended to be heard.

I do recommend Claudia for the simplicity shown in the events of a young couple's life, and the awareness that youth is fleeting and that it is important to look toward old age, and hopefully to grow older as gracefully in that endeavor as possible.

If you are looking for a Radio Show with warmth and security and an overall good and clean tone to it, Claudia is the show for you. I can't recommend it to highly, but don't expect the first 50 or so episodes to impress you as it is only after 70 or even 80 episodes have been listened to, will the magic of this seemingly very simple little show begin to make its' impression upon you, and then you will want to listen to all the episodes and fear the day they will end. Fortunately this show is available in crystal clarity through Radio Archives out of Spokane, Washington.

Claudia is available in heavy duty plastic boxed sets with individual plastic sleeves for added protection if you want the CD's. They are complete in a 10 Volume Boxed set (which can be bought individually) in the normal CD speed, no inferior MP3's. A download is also available and the cost is considerably less. Unique also in that such a long running series still exists with all episodes complete from beginning to end, and having been beautifully restored to its' original audio and tonal quality.

Uploaded by OTRRArchive on November 14, 2012